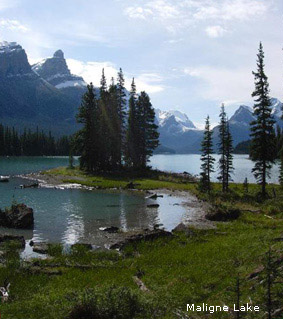 With a total area of 9,970,610 km² Canada is the world's second largest country. It occupies most of the North American continent, extending from the Atlantic Ocean in the east to the Pacific Ocean in the west and northward to the Arctic Ocean. In the south and the northwest it is bordered by the US. Although Canada is that large there are only three characteristic regions - the Canadian Rockies and Coastal Mountains, the Great Plains in the middle and the Canadian Shield in the north and east.

Canada extends about 3,000 km from Toronto at the Lake Ontario in the east over the Rocky Mountains to Vancouver at the Pacific Ocean in the west - and in between the whole beauty of the country.

One possibility to discover the most beautiful Canadian cities and see the natural wonders is a trip with a car or a caravan along Canada's longest road:

TCH! - Real fans of Northern America often passionately react to these three letters: their eyes become shiny, blood pressure rises, sometimes the face even reddens, although these three letters only refer to a road. But this road is very special: the Trans Canada Highway runs through the whole country, from St. John's on Newfoundland in the farest east over to Victoria on Vancouver Island in the farest west of the country. The complete distance of the TCH with all its detours and sights amounts to 8,000 km. Imagine you started in Munich driving the distance of 8,000 km into the (north)west - you would reach Canada.

The HWY 1 starts in the east - in the city St. John's at the shores of the Atlantic Ocean. It runs through the provinces Newfoundland, Nova Scotia and New Brunswick past the city of Quebec over to Montreal. Following the HWY 1 you pass Ottawa, North Bay, Thunder Bay (all three located in the province of Ontario), Winnipeg (Manitoba), Regina (Saskatchewan), Calgary (Alberta) and finally after leaving the Rockies you reach Victoria on Vancouver Island (British Columbia) in the farest west at the shores of the Pacific.

Natural wonders like the Algonquin Provincial Park, the Niagara Falls, the Banff National Park, and the Jasper National Park alternate with Quebec, Montreal, Ottawa, and Edmonton. Gorgeous national parks in the Rockies and trips into the mostly untouched nature following the traces of the former gold diggers - this is CANADA. The variety of nature is really impressive - from snow-covered mountains, dense woods, wide tundra, and winding fjords to fruit farms and vineyards, crystal mountain lakes, rich green pastures, and impervious rain forests.